I saw on my most recent royalty statement that my book has been translated into Ukrainian! Would love to see that, although I definitely don't read Ukrainian, But I hope the kids who were sent the book from PJ Library enjoyed it! Budmo! 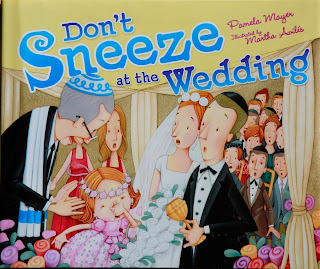 Posted by Pamela Mayer at 1:48 PM No comments:

Great and unexpected news! Chicken Soup, Chicken Soup is a PJ Library selection for the second time. I only found out because my granddaughter received it as her PJ Library book this month! 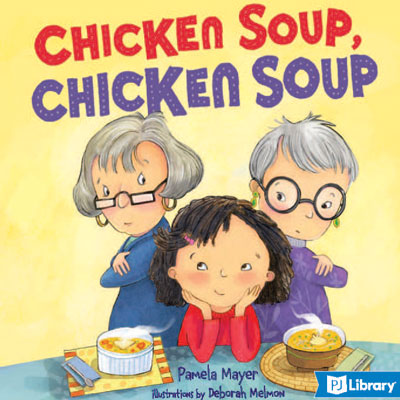 What Other Families Say About This Book

"My family is mixed - Jewish & Chinese. When we received this book, it lit up everyone's eyes! It's perfect for our family from two different ethnic and cultural backgrounds, but with the same love for Israel and Judaism!"
"This has become a family FAVORITE! Thank you, PJ Library; the books you send bring joy to our family! "
Posted by Pamela Mayer at 1:00 PM No comments: 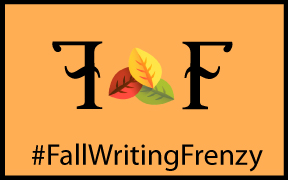 I just found out about a fabulous-ly fun contest called the FallWritingFrenzy. Here is my entry, based on one of the inspiring photos, 200  words or less.

THINGS ARE NOT ALWAYS WHAT THEY SEEM

Here they were again.

At the bottom of the stairs in the same place, the blanket, the open book and the cup of -

What exactly was in that cup anyway?

time, the smell and those sounds. For a moment she thought she would be sick.

One thing for sure, she had to take care of it quickly before Margery saw it –

The last rays of the setting sun illuminated the yard. Yet Marla felt more than an autumn chill

creeping towards her. She shivered.

Last time she had bundled the items up in a box and left them by the river.

She remembered what Grandmother had taught her, “Things are not always what they seem.”

This time Marla picked up the book. She read the words on the page.

So that was it.

Sitting down on the bottom step she wrapped the blanket around her shoulders.

Then Marla took a sip from the cup.

I've been thinking about a book I love called Star Mother's Youngest Child. It's a Christmas story and is a beautiful and intricate tale about everything that matters. Star Mother's youngest child wants to celebrate Christmas. When he lands on Earth at the home of a grumpy old woman, against all odds, they experience a gorgeous and meaningful celebration together.

I think one of the reasons I'm thinking of this book is because of the old woman character. If I remember correctly (unfortunately I do not own a copy of this beloved book), she was so old that everyone had forgotten about her, and cranky in her loneliness. I've been thinking about people who are alone and forgotten during this pandemic and time of isolation, perhaps feeling cranky like the woman in the story. I know I would be feeling that way.

The story, by Louise Moeri, is enhanced by illustrations by Trina Schart Hyman. Her work and career are so astounding. I own several books which she illustrated, Little Red Riding Hood, Snow White, A Child's Calendar, A Child's Christmas in Wales and Peter Pan, but there are so many more. I'm sure there have been retrospectives of her work, but I've never been to one, and would love to see a show like that. She illustrated over 150 books, and won the Caldecott award, as well as being the first art director of Cricket magazine.

I once saw her speak, many years ago, and something that sticks in my mind is her work ethic. She mentioned that her daughter had once said that when she woke up in the morning, her mother was working on her illustrations, and when she went to bed at night, she was still working on them. I also remember her saying that she lived in Sweden for a time when she was young, and found out in the forests that elves and trolls and fairies really did exist.

I hope you take a look at her fabulous work. As for me, it's time to order a copy of Star Mother's Youngest Child. The original publication date is 1975, but there is a 2005 Anniversary Edition, fortunately. By the way, my copy of The Beast of Monsieur Racine should arrive next week!

Posted by Pamela Mayer at 8:16 AM No comments:

I've been thinking of Tomi Ungerer today. I love his work. His children's books were unique, just like him. Years ago I read his autobiography, Tomi: A Childhood Under the Nazis, which was fascinating.
Of course, I don't know that much about many of today's current children's writers and illustrators, but I'd be surprised if any of them were quite as colorful and original as he was. He was one of a kind.
Which is not meant to denigrate current artists. There are so many beautiful, splendid books. But some seem more earnest and serious than his were. Perhaps it's a generational thing. Picture books, like any art, are always growing and changing, and his books are from a different era.
I've been thinking that Molly, my eldest granddaughter, a kindergartner, would appreciate reading some. The Three Robbers is still available at our library (when it reopens after the pandemic), but I will have to buy a copy of The Beast of Monsieur Racine. I think that book will suit her imagination very well. I see that it is available on bookshop.org - yay!
My daughter has been reading the Laura Ingalls Wilder books to her while school is out. Molly has taken to putting on a bonnet and walking around the backyard many times, to relive the two and a half mile walk Laura took before she went to school. I wonder what it will be like for Molly when school finally starts again, and if she will be able to complete her year of kindergarten. Of course I miss her and her sisters terribly, and her cousin, my one year old granddaughter, Annabelle. I hope I can visit them soon.
Meanwhile, I'll be here, reading, writing, and visiting old friends by phone, online, and in the pages of books.

Posted by Pamela Mayer at 1:28 PM No comments:

7 a.m. Get up. Make coffee. Turn on the news to see what is happening with the virus. Go outside for newspaper. Hear the birds, breathe the fresh air. Bring coffee to hubby.

8 a.m.   Make breakfast. Read newspaper. Do all crosswords and Jumble. Facetime with granddaughter A.

9 a.m. Take shower. Get dressed. Straighten up. Telephone a friend or family member to see how they are.

4 p.m.  Clean out a drawer or closer. Bemoan amount of stuff. Keep most of it

4 a.m. Wake up and worry about the virus
Posted by Pamela Mayer at 3:50 PM No comments:

I'll be presenting a program with THE MOUSE WHO DANCED THE HORA at the Jewish Community Library next month. It will be a mouse storytime so I'm busy creating some new flannal board games and songs. Of course, we will dance the hora too, just like our little mouse, Tillie Mouscovitz. PJ Library sent the book to six year olds, but I'm thinking younger children will probably come to the storytime. We shall see!

There are many books which feature mice as main characters because, like children, they are small but mighty!
Posted by Pamela Mayer at 8:22 PM No comments: